A Walnut-Size of Butter 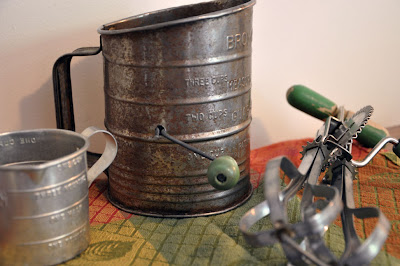 A “walnut-size of butter” is a great phrase, but what the heck does it mean?

Making my great-grandmother’s recipes has necessitated that I do a little research on cooking terms. For instance, what’s a yeast cake? That refers to a compressed yeast cake. I don’t know where I might find one, but through a little digging I learned that a yeast cake is the equivalent of one tablespoon of the dry yeast that I buy at the grocery store.
Thanks to Helen in Oregon, I now know that a walnut-size of butter is equal to roughly two tablespoons. (A “hen’s egg of butter” is three to four tablespoons.)

Helen gave me two articles, both entitled “On Using Very Old Recipes,” written by Carla Emery and originally published in the September and October 1972 issues of Organic Gardening and Farming. I also include the scanned copies of the articles with this post. They explain all sorts of terms we no longer use. Assuming that not much has changed in the recipe department between 1972 and 2010, some may find these definitions helpful.  (Click to enlarge.) 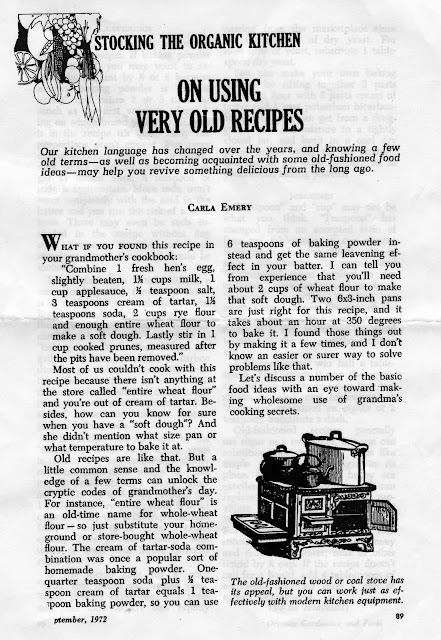 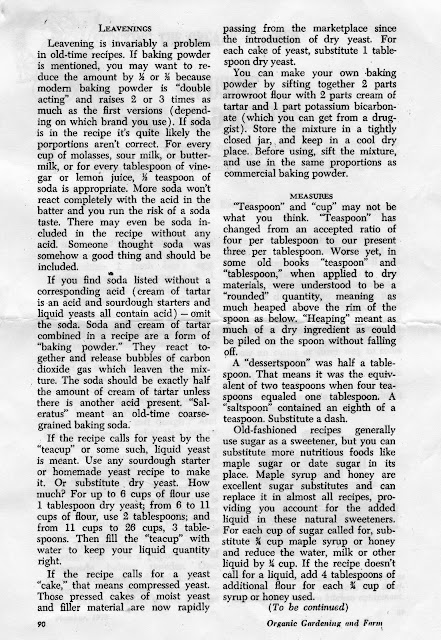 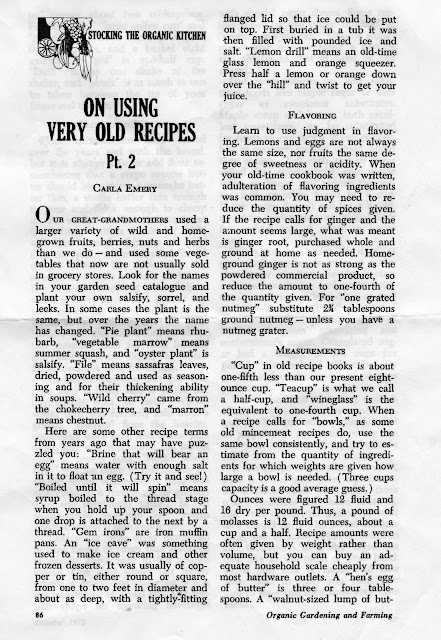 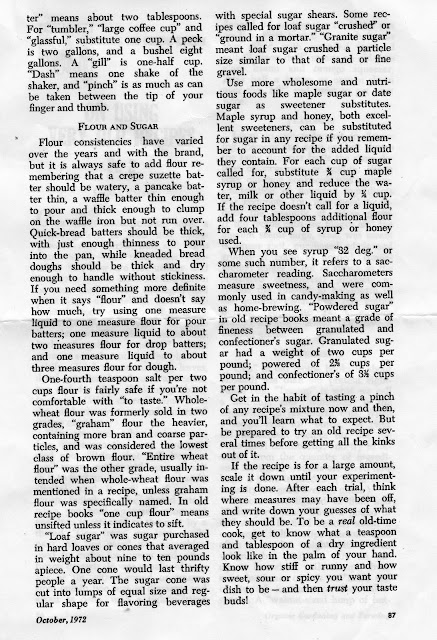 A recipe calling for yeast “by the teacup” means that you need liquid yeast. If you do not have that you can use dry yeast. “For up to six cups of flour use one tablespoon dry yeast; from six to eleven cups of flour, use two tablespoons; and from eleven cups to twenty-six cups, three tablespoons. Then fill the ‘teacup’ with water to keep your liquid quantity right.” (September 1972, p. 90)

Admittedly, I do not know what that last part means. Do I add the teacup of water to the yeast and flour? Or, do I simply fill a teacup with water and leave it next to the flour-yeast mixture in some act of kitchen voodoo?

At any rate, a pound of molasses is not sixteen ounces. It's twelve.

A “dessertspoon” is equal to two teaspoons. A “teacup” is one-half cup, while a “wineglass” is one-fourth cup. Something called a “gill” is one-half cup. (So, I guess a teacup is equivalent to a gill, and a wineglass is one half a gill.) 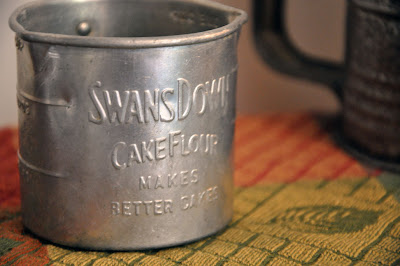 A “cup” is not the same as today’s (or 1972’s) cup. It’s actually one-fifth smaller. This I already knew to be true, because I compared my great-grandmother’s Swan’s Down Flour measuring cup with my measuring cup and quickly figured out that my cup was not her cup.

I wish her flour-sifter were not so rusty, because it works better than mine. Her eggbeater can still do the job too.